You loved the ambiance of Circus Akya or you were charmed by the music of Circus Morocco? Productions Éclats de Rire offer derivative products to commemorate the great moments spent in their company.

Inspired by the Circus Akya family, the book Le plus GRAND petit cirque – Les vacances chamboulées (“The BIGGEST little circus – a vacation upheaval”) has us discovering the family troupe from Circus Akya who, throughout the summer months / holidays, navigates through the streets with their caravans and big top, made of aluminum.

Summary : The story takes us to the eve of summer vacation when the family is contemplating a “normal” vacation for the first time. Over the summer, Franka wants to become a mini clown and Adrian, an apprentice clown. But a summer of camping and training for a career in the circus universe suddenly becomes a tumultuous adventure as the saltimbancos must assist the inhabitants of a sombre town in finding their ability to smile again.

The book sends the young reader into a fascinating universe where reality and fiction intertwine.

At the end of the book, you will not only find games, but several good reasons for using aluminum and also discover the real installations of Circus Akya.

Illustrations : Bruce Roberts, named best illustrator in Québec for 2003 and recipient of several prestigious awards including the New York Society of Illustrators in 2004, and the 2001 Governor General’s Award.

This book has won the prize “Livre pour enfants – livre scolaire” in the Lux 2009 Contest, in recognition of the best visual accomplishments throughout the year in the photography and illustration segments across Québec. 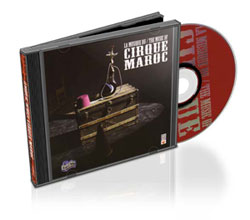 “The music for a circus show is of the utmost importance. It must be a rigorous accompaniment of the movements performed by the artists throughout their numbers. The perfect rhythmic and poetic symmetries of the musical pieces that Sylvain Gagnon and Thüryn Van Pranke have composed for Circus Morocco are the perfect expression of the unspoken… Let us listen.”